Depending on location and habitat, outdoor workers have the potential to encounter venomous snakes and should take the appropriate precautions to prevent a bite. According to the CDC, an estimated 7,000-8,000 people per year receive venomous bites in the U.S., and about 5 of those people die. Snake venom may cause tissue or nerve damage, but a snake bite is usually not fatal to humans if proper medical treatment is received. Disability and permanent injury, such as the loss of part or all of a finger or its function, are much more common.

Health Risks of a Snakebite 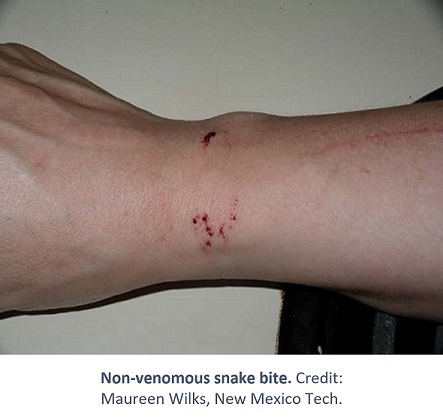 Treatment: What TO DO if a Snake Bites You or Someone Else

Immediately move away from the snake. Note the color and shape of the snake or take a photograph from a safe distance if possible. Identification of the snake can help with treatment of the bite.

Treatment: What NOT TO DO if a Snake bites You or Someone Else

Nonvenomous snakes typically have rounded heads, round pupils, and no fangs. Illinois venomous snakes are pit vipers. They can be identified by their elliptical pupils, triangular-shaped head, fangs, and a large opening, or “pit,” on each side of the head between the mouth and nostril. Except for the timber rattlesnake, the tip of the tail is bright yellow in all juvenile Illinois venomous snakes. Be sure to research venomous snake species you may encounter when working outside of Illinois. 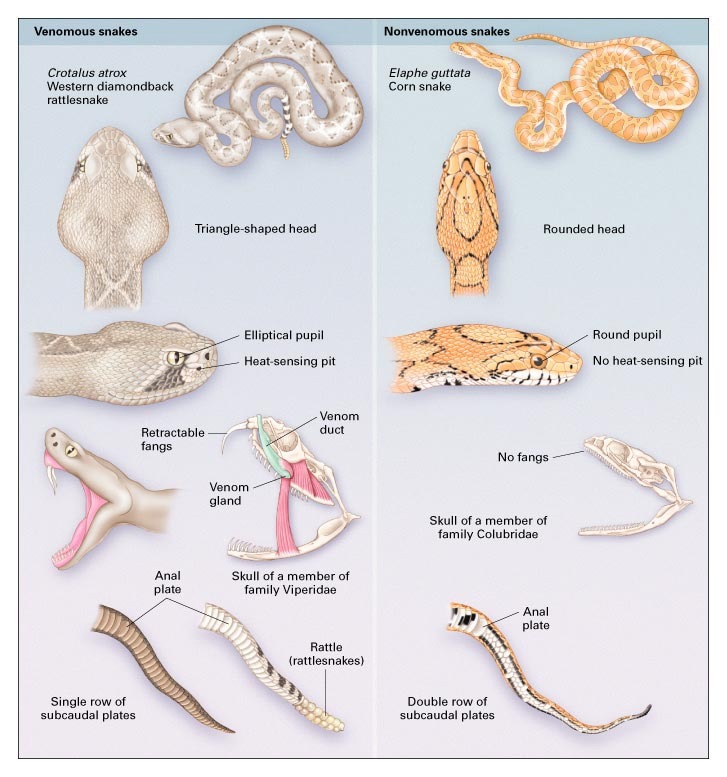 Snakes are not aggressive and tend only to bite when stepped on, picked up, or cornered. Take the following steps to reduce the chances of a bite:

Know when to expect snakes

Know where to expect snakes

Know what to wear

Know what to do when you encounter a snake

Know how to spot a threatened/provoked snake

Download the CroFab® Snakebite9114b app available for Android and iPhone devices. This app provides education about North American pit vipers, can help track the progression of a bite, and find a hospital nearby.

Identification: Pit viper. Distinguished by a copper-red head; red-brown or yellow-brown body; hour-glass markings across the back when viewed from above. Adults average 24-36 inches (≈60-90 cm) in length. 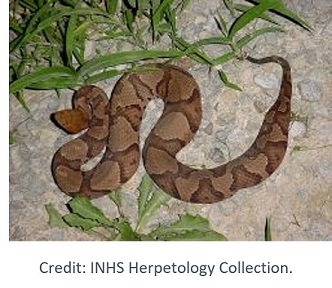 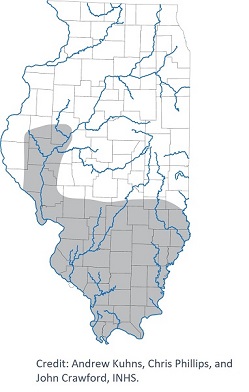 Behavior: Active during the day (diurnal) in spring and fall, become nocturnal in the hottest summer months. When disturbed, will flee. If trapped, rapidly vibrate tail, making noise against whatever the tail hits. Not usually aggressive, but often freeze when frightened and l strikes in defense when threatened. May be found in groups, particularly in fall when moving to overwintering dens.

Distribution: Found in the southern one-third of Illinois (south of Route 16) and in the lower Illinois River valley.

Identification: Pit viper. May be plain black or brown above with little evidence of a pattern. Some have dim crossbands across the back. The tip of a young cottonmouth’s tail is yellow. Adults average 30-42 inches (≈75-105 cm) in length. 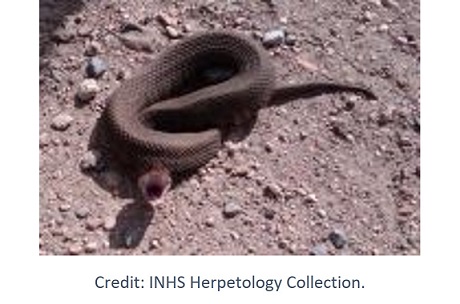 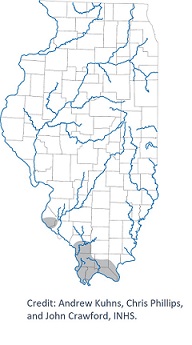 Behavior: Semiaquatic and mainly nocturnal. When disturbed, will either remain in place and vibrate its tail or slowly crawl/swim away. May tilt its head up and gape, showing the white interior of its mouth, hence the name “cottonmouth.” Overwinters in dens in rock crevices with other species of snakes.

Habitat: Inhabits swamps and wet bottomlands. Frequently found in or around water.

Identification: Pit viper. Rattle present at the tip of the tail. Has keeled scales (ridged). The body is gray, yellow, or green-white with a series of dark bands along the back. A rust-colored stripe is present in the middle of the back, and a dark bar may be found between the eye and jaw. Adults average 36-60 inches (≈90-150 cm) in length. 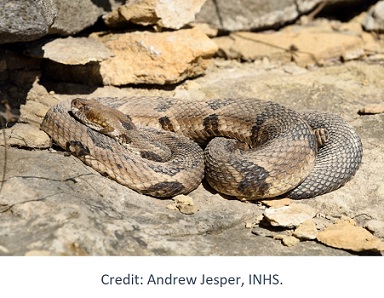 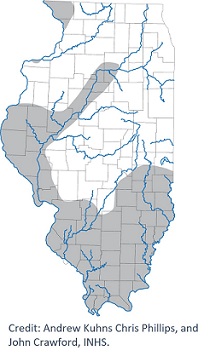 Behavior: Active during the day (diurnal) until temperatures become too high in summer and then becomes nocturnal. Remains hidden and camouflaged. When disturbed, will try to escape or coil and rattle the tip of the tail producing a buzzing noise. Hibernates in dens in rock crevices with other snake species.

Distribution: Found in southern one-fourth of Illinois (south of Interstate 64), in the lower Illinois River valley, and in the Mississippi River valley.

Identification: Pit viper. Rattle present at the tip of the tail. Scales are keeled (ridged). A row of dark blotches is present down the back, and there are three rows of dark spots on the sides. The body is gray. Adults average 18-30 inches (≈45-75 cm) in length. 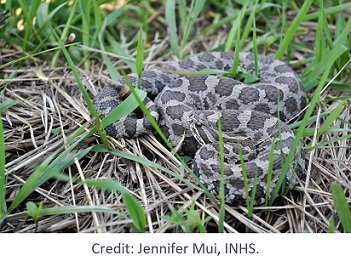 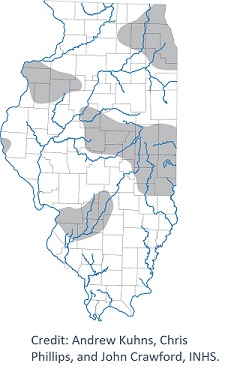 Behavior: Active in the day (diurnal), except in the hottest summer months it becomes nocturnal. May shelter in crayfish burrows, rodent burrows, or other underground cavities. Basks on grass, near crayfish burrows, downed woody vegetation, or other open locations. If disturbed, may rattle but most likely will remain motionless.